The silk wrap-effect blouse has a crossover front design, low v-neck and curved hem. This sumptuous 100% silk top features flared french cuffs with single button closures—a showcase of extreme attention to detail. A back seam provides an easy sense of movement, so it can be worn tucked in or out. 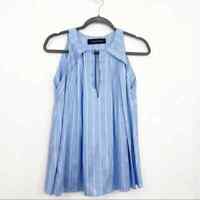